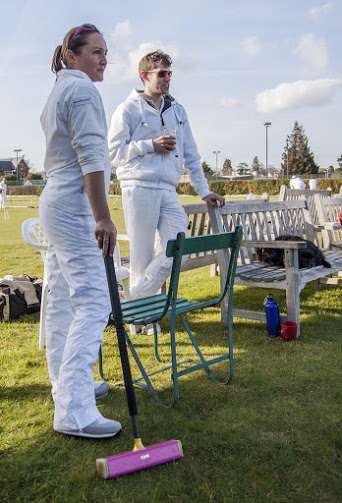 Just a quick recap, this is my croquet story so far:

So, here we are in my forth season (third full season) of playing croquet.  And what a season it has been too.  In the winter running up to April 2017 I played indoor croquet and partnered my Dad.  Not only was this fun, it was also a lesson in how to be a doubles partner.  The indoor croquet is played on a short lawn, which is actually a carpet.  It’s odd to think about this now, bearing in mind the title of this blog article, but this indoor croquet experience boosted my confidence to the point where I knew in my head and my heart I could hit any ball from anywhere.  Not only could I hit everything from miles away, I was accurate, really accurate!  There is a term in croquet which is ‘touch’… I had ‘touch’.  But then, the season began.  And all I can really say (or shout really) is ‘Where the ******* ******* **** did my croquet go???’.

This year I have managed to achieve the following, in no particular order:

Without going into too much details, let me just say, this year has been a disaster.  I have actually found myself crying in the middle of a lawn because absolutely nothing would go right.  Last year, okay I lost lots of games against amazing players, but at least I played well.  I played to a good standard, a better standard than each of the days that had passed before.  This year, I feel I have been going completely backwards.

Now here is the interesting thing... I have actually been warned about this whole scenario by other croquet players.  Here are some of my favourite popular phrases which I have heard in the past, I have added my own comments below which may help someone else in the future.

An incredible understatement meaning that you are a fast improver and have probably been called ‘a natural’, only to find that when you have mastered the 4 ball break croquet is actually really difficult, verging on sodding impossible!

“One day you will only want to run hoops from 6 inches away, straight in front”

In the beginning I could run a damn hoop from the opposite end of the lawn, so what this really means is that over time, the lawn gets bigger, the hoops get smaller and the peg becomes somewhat non-existent at the end of a game… unless you are six inches away, and straight in front!

“You will start to lose games, but don’t worry, it will all come with experience”

What this really means is that croquet is hard, you will be playing against someone who has played for the last 30 years, no matter how good or bad their shots are, they are going to have the 30 years’ experience to deal with it, fact!

The emotions I have felt through this year, going through this process of ‘being bad at croquet’ have been incredible, from tears of frustration to aches of anger.  I have however finally come to an agreement with myself, I must learn to have fun again.  Croquet is competitive, but it is also a fabulous and fun sport, and I think I have forgotten to have fun in my mission to be a great croquet player.

Roll on Year 5, time to enjoy croquet for the amazingly competitive, strategic and fun sport it really is.  Whilst winning of course!