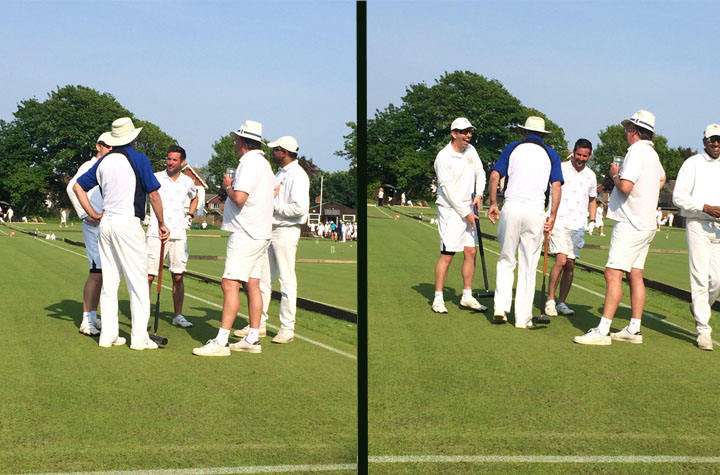 I had the privilege of playing for Somerset in the Counties.  With over 160 croquet players over two locations, 22 counties were represented and I’ve never seen so much white clothing in my entire life all in one place.  I’m pleased to report that despite me being on the team for the first time, we were not relegated to the second division… phew!  We didn’t however win, but there is always next year.

The most interesting thing about this event is that it really is a team event.  The support for team members throughout all of the teams, which could be witnessed on and off the lawn, was for me a real heart-warming experience.  Knowing that I would struggle to win games against some of the other players, who also happened to be not just the top in the UK, but some being the highest ranked in the world, my own team were happy to accept me as one of them and encouraged me to use the event as a learning experience.  All games are doubles games, so over the four days of play I had three different doubles partners, all of which helped me win a game on each day.  From literally pointing at the blade of grass I needed to put my ball, to calling me a ‘donut’ (okay, that’s the child friendly version) when I needed to step up my game, I felt like part of the team.  A real team!

Playing alongside and against the highest ranked players in the country was just the beginning of what an extraordinary year this has become.  I have learnt many things, but the first lesson to learn was this, Lesson 1; Don’t apologise, just play better!

Having survived, just, the counties, I ventured towards my first appearance at the Men’s & Women’s Championships, and what an experience it was too.  It started with holiday time for my Mum and I, ice creams on the pebbled beach in Budleigh Salterton and a few games of scrabble to set us in the competitive mood.

The last time I played in a tournament at Budleigh was just over a year ago, with a handicap of 20.  So being able to play in the Men’s and Women’s was such a great privilege and dare I say achievement.  So I had it in my mind that no matter what the score was, I was still proud of myself for being there.

The games began on the Wednesday, where the lovely Rob Wilkinson partnered me in the Mixed Doubles event.  Although we only won 1 of our games, it was an honour to play with him and once again, against some of the top ranked ladies and gentlemen in the country.  We hadn’t partnered each other before, but being practice partners I think we were well matched and managed to keep up each other’s spirits throughout the miss hits and oops moments.

Thursday and Friday brought us more sunshine, which also brought out a little bit of the best of me.  Managing to win 3 out of 5 of my games against the other Ladies, I was pretty much on cloud nine.  Louise Bradforth sailed around the court leaving me speechless whilst watching her outstanding play.  And well done Louise for winning the event, very well deserved with a fabulous result of 3 triple peels in a row through the final.  This brings me on to her opponent in the final, the lovely Gabrielle Higgins.  I must admit, I didn’t think she was quite so lovely having pegged one of my balls out and testing my ‘not so amazing’ tactical ability.  Gabrielle won our game quite rightly with amazing tactics, stroke play and above all, patience.  Something I am still trying to learn.  But I can only say a huge thank you for an amazing game, her advice after the tournament and encouragement for my future.

Firstly… Holy Moly… I was allowed to play!  I will start at the end of this tournament with the winner Reg Bamford.  Naturally I didn’t actually play him myself, but I did play in the same tournament!  Again… Holy Moly!  Reg is currently number three in the World Rankings, he stormed through each of his games peeling balls left, right and centre.  I had at this point never seen in action a ‘Sextuple Peel’ (sending your other ball through six hoops whilst navigating the playing ball through the rest).  It is definitely something spectacular to watch, but having eagerly gone back to my home lawns to attempt just the first of the triple peel, I am still completely in awe of the achievement.  My own games were not exactly as successful, but I did manage to win a couple of games which helped my ranking and handicap.  Phew!

I had one particularly poor day, which I think actually brought a tear to my eye.  My own frustration at my pathetic attempts to even hit another ball two feet away and missing, not to mention the hoops appearing to leap three feet to the left each time I tried to run one, was not easy to control… And I hate to admit it, but a little girly temper tantrum loomed.

Lesson 3 is a tough one; Keep calm and carry on, forget the last poor shot and make sure the next one is perfect.

Yep, you heard it right… I actually played in the British Opens.  Determined now to put everything I had learned into practice, I went into the tournament with open eyes and understood that I could lose every single game.  But I also knew that another great lesson would come my way.

Over 30 people played in this event from 6 different countries, I played 18 singes games and won… wait for it… 3!  You have no idea how much I enjoyed myself, even the loosing.  Incredible!  The competition was held over 9 days and by the end of it, I was exhausted.  But… I do have some good news… I had a doubles partner.

The amazing Dave Kibble, not only partnered me knowing that I was the lowest ranked person at the event, but also it was likely we would come 2nd… a lot, managed to drag me and my mallet around the croquet lawn and win some games.  Can you believe it… we got to the Semi-Finals of the British Open Doubles event.  All I can really say is Dave Kibble… you are my hero!

So, with far fewer tantrums (there may have been one or two), a lot of patience and the will to play better shots… I honestly feel I played the best I could at this point in my croquet journey.  But of course there is always another lesson to learn.  Lesson 4; Listen and learn.

The real highlights of the opens for me came at the end of the days play.  Not just getting to know my fellow croquet players better off the lawns, but also being able to accept their willing coaching and advice.  I can’t thank my opponents at this competition enough for their support and encouragement, willing me to become the better player I strive to be.

So that’s the 2016 story thus far, my handicap is now 16 and I am currently ranked 434 in the World.  The next events are the Barlow Bowl, Northern Championships, Selectors Weekend and the Southern Championships.  Oh, and before all of that, a day’s coaching with Dad J